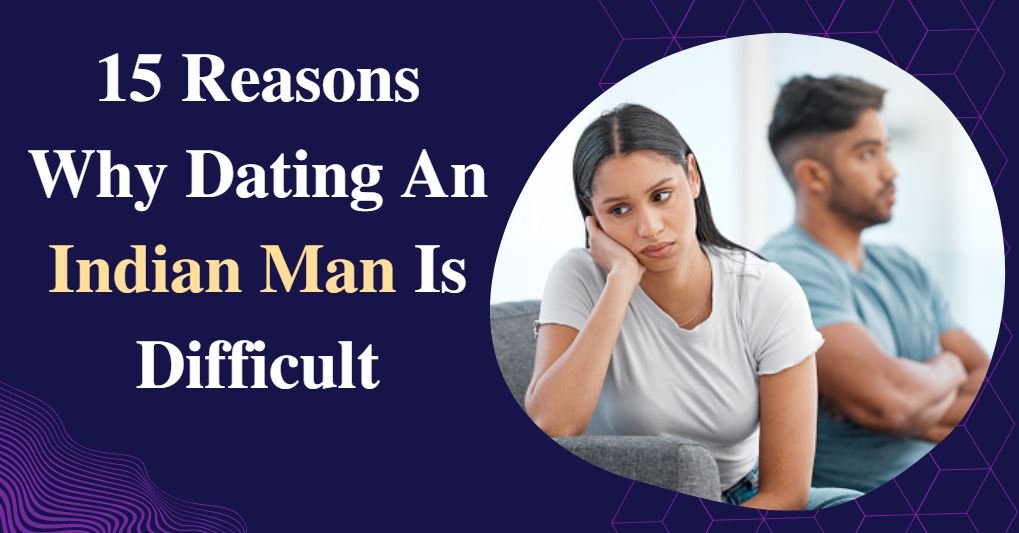 15 Reasons Why Dating An Indian Man Is Difficult

Dating is described as the process through which two people consider one other for a potential long-term connection, like a live-in relationship or marriage. But, Indian men are a distinct breed. Indeed, there are various stereotypes about Indian men that you hear, and while the majority of them are actually correct one can never fully comprehend them. Dating Indian men is a very different scenario. Here in this article we will discuss 15 reasons you should know about dating an Indian man that are both complex and perilous. So, let’s get started.

What does wooing mean? Seeking someone’s affection with the purpose of marrying or starting a romantic relationship. But sometimes we need to correct the definition of this. For the record, wooing does not entail cat-calling, those creepy smiles, or chatting in such a manner that it is evident that our breasts are all that you are thinking about. They either ask for a movie, coffee, or your phone number with the weirdness.

Unrealistic expectations include things like Yes, we had a date with you, Yeah, we appreciated your company. Nope, it’s simply not acceptable to assume that we will sleep with you, marry you, and have children for you. Expecting anything in return? Cruelty at its worst.

Men have a tendency to generalize over women. We get a tattoo, have a few drinks, and hangout out with your friends, therefore it must be ‘easygoing,’ correct? We are not sure where you received your knowledge, however you should go back and gather some good common sense. Be a man and accept that we have a life and that it is acceptable for us to be involved in it.

Mothers frequently believe that they are responsible for their son’s accomplishment, and they are appreciated by other relatives and friends for the way they raised their son. Nobody and no one can ever take the place of the Indian mother. We may be the most beautiful, talented, wealthy, and generous persons on the globe, and even though we must first be approved by mom.

Body odour is considered acceptable among Indian men. As a result, they perform an excellent work of annihilating anything in their path. If we put smelly Indians in conflict areas, the opponent would surrender before they died from noxious odours.

It is a well-known truth that Indian men are among the laziest beings in the world. It’s awful to wear the same clothing every day. To make matters worse, the majority of them recycle their undergarments by wearing them inside out.

Etiquette puts individuals at ease and demonstrates that we respect and appreciate others. Etiquette encourages thoughtfulness, compassion, and humility. Opening doors, driving us home, and waiting until we are ready are all qualities that Indian men have yet to master. Also, do not assume a Please or a Thank You.

The Feeling Of Possessiveness

Possessiveness over a partner is something that can only harm a relationship. Do not meet your friends there, do not go there, do not work there, and do not dine there. What the hell do they think they are doing? Your lover will think that he is the only one in your life and that everything revolves around them.

It’s So’ much more than a romance, sweetie.” It is for the smart Indian men. Sure, why do not you keep on believing that we women are foolish enough to believe all the nonsense you spew?

Men with large egos are frequently insecure and attempt to hide their insecurities by overcompensation. In reality, the egotistical man lacks confidence and self-esteem. A man with great self-esteem has faith in his own abilities, is aware of his flaws, and adores himself. According to study, the bigger the ego, the smaller the appendage. Indeed, study revealed that males who honk frequently are sexually unsatisfied.

You are not of the same caste, thus it’s not working? So why isn’t he doing exactly the same? Are we still in the 1800s? Most Indians still choose religious and caste-based marriages. But it goes without saying that marrying someone from a different caste entails learning new things.

Whenever it comes to Indian guys, distinguishing between a glancing and a dirty gaze might be difficult. Furthermore, their eyes are skilled enough to scan a female body in just microseconds. Eyeballs that are inherently flawed?

After all, mama insists on an arranged marriage for her prince, therefore you will never be the one he marries. Love, feelings, freedom of choice, and thought are all meaningless! Because momma knows the best. Dating an Indian man is generally a package deal. Marriage does exist, but it is between two families, not two individuals.